Elves make a great first army, due in large part to their speed and decent defense thanks to archer units. Their diplomatic units cannot hold as much as other races, but they move more swiftly. They tend to make excellent archers and swift riders. Elves are one of Illyriad’s more common choices.

And the first life yearned to begat life; and life grows, by its nature. And so she made herself many; and so he made himself many. Forms were imagined, and they were distinct; and as they were distinct, they needed names, which they also imagined.

And so these many lives, these imaginers, these Lightened, our gods, they understood, and loved, and grew. And they yearned to make what was not of themselves, but which they could love, and which could grow, illuminated by their wisdom. And so they created their First Daughter.

But the First Daughter was most terribly flawed. She was not of the same nature as the Lightened, of our gods. They did not touch her as they made her, but only willed her to be, as one might dream a thing but not set one's hand to its creation. She was made by them from filth and mud, of base and decaying things. And she was cruel, and angry, and sought not to understand or to love or to grow, but delighted in cruelty and ignorance.

So the Lightened made the Second Daughter, made from air and fire, and into her they breathed their breath. But the Second Daughter had no constancy, but was ever-changing like the winds, inconstant as fire, prone to fitful moods, and without love for those who had created her.

So the Lightened made the Third Daughter. She was made from solid stuff, from stone and clay and iron and ice. And as they made her, they touched her with their forms, that she should know their power. And she had understanding. But she had not love. And as she had not love, her understanding was cold, and barren, like iron or ice. She could calculate and plan, but not care nor feel.

And at this the Lightened despaired, and they wept, and they yearned for a daughter who might be worthy of their hopes. And they drew down the light of the stars, and formed from that a final daughter, and their tears fell upon her, and in their tears fell all their yearning and their love and their regret for their mistakes and their hopes for all that she might be. And when this last daughter stood before them, they proclaimed "This is a worthy daughter!"

Now, the Second Daughter, ever fitful, was jealous and proud, and raged against the first-named, and stormed away into the desert, saying, "I am as worthy! How dare you praise her, just because she is closer to you in light and love and understanding! We all are mighty and clever, as you are!"

And the seeing this, the First Daughter was aghast, proclaiming "the Lightened made us and love us and this rebellion is a disgrace! I shall defend the first-named, and I shall make Murder to do this. I shall do what has never been done, I shall kill a Daughter, as warning to the others they they must obey the first-named!" And the Lightened were shocked, for they loved all their daughters, yet the First Daughter would not listen to their entreaties, but vowed in their name to destroy what they loved.

And so the two daughters fought. And they gave birth to children who might fight with them, as none could overcome the other alone. And the First-daughter and her Orc-children held the highlands, and launched their attacks from hovels in the hills. And the Second Daughter and her Man-children cultivated the desert, and built forts on their green plains. And the Third-Daughter, fearful from the warfare, hid in the highest peaks, and birthed Dwarf-children to dig mines and tunnels in which she could be safe.

And the first-named turned to the last Daughter, that is, their favoured Daughter and said "you are the closest to us, the best of our daughters. Make peace between your sisters!" But the Favoured Daughter was made of nothing but starlight, and she fell down and wept.

And so the first-named went out to entreat with their Daughters, and could not make peace. And some sided with one Daughter or another, while others stood aloof, but all were pained by the fighting and misery that their daughters had caused, and one by one they withdrew from the world.

And so the Daughters were left alone. Each with their children, and each in their own domains. And so it was in the First Age, that the Man-children toiled in the fields to support their armies, the Orc-children hunted amongst the hills to feed their fighters, the Dwarf-children scratched under the mountains to build their defences, and the Elven-children wandered the wooded ways in misery. 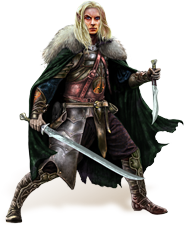 And that is the story of the First Age.

And you, listening, might say to yourself, "Is this so? Does this story tell us all that was? When the last daughter, the Favoured Daughter, was made from starlight, whence had the stars come? When the Third Daughter rebelled, who had made the desert into which she fled?" Of course it does not tell you all. "Are these real facts, or just stories?" you might ask, "and why do others tell different stories?" But it does not matter if the facts are correct, nor what Orc or Dwarf or Human priests might preach. It matters only that the story is true. And this is the truest story that ever has been told or ever will be told.

You, you are no iron-cold Dwarf-child, to ask for cold facts. You are no warring Man-child, nor Orc-child, to seek in stories excuses for your pride or cruelty. You are born from starlight, from tears of hope and tears of despair and tears of wisdom, and to you it falls to understand, to love and to grow. And so this is a story of growth and love, that you might understand.