Two years in development, Illyriad offers players the depth of gameplay expected of a subscription-based game, but without charges. Set in a vast persistent world, players take on the role of a ruler founding first a single settlement and later expanding their empire to encompass multiple cities and broader territories. The game is an evolution of the familiar city development and resource management model, and adds features such as spies, theft, assassination, trade, and diplomatic relations to give the player the freedom to become the sort of ruler that they want to be.

“We started building the game two years ago,” explains Illyriad Games’ founder, James Niesewand, “very much as a game that we could get really excited about as players. We wanted an MMO empire-building game that could be played without downloads or plugins, that was set in a persistent, non-resetting sandbox fantasy world with a proper geography, the highest quality text and graphic content, that had a genuine diversity of game-play options and that didn’t treat its players like ATMs. We didn’t think it was too much to ask, but couldn’t find any free-to-play games out there that fit the bill – so that became our mission.”

“The first version of Illyriad went live a year ago, allowing us to test the game with live players. And through that later development phase we added more and more features, and upgraded the graphics. Now we have finally reached the stage where we are happy to announce the game and to start to promote it, but that isn’t to say that the game is finished. As a persistent, on-line game, we will continue to add new features, content and expansion packs. We also have further art updates in production, and a really exciting new feature list to release over the next few months.”

Illyriad is free to play now, at www.illyriad.co.uk , and new feature releases will be announced in the near future.

“… some of the most fun is had in imagining the alliance lines being drawn or the secret meetings that decide the fate of entire sections of the globe!

Illyriad achieves this feeling, not by brute force but by allowing you to get to know your neighbors — and your enemies. Travel and trade is realistic, as far as the time required to do both. … If you zoom out on the map, you will see just how large the world is and just how much time it might take to cross it. Search the map for alliances and you witness how many lines are indeed being drawn. Despite the very friendly community, I never once stop thinking about the battles and wars going on at that very moment.”

You can read the full article here. 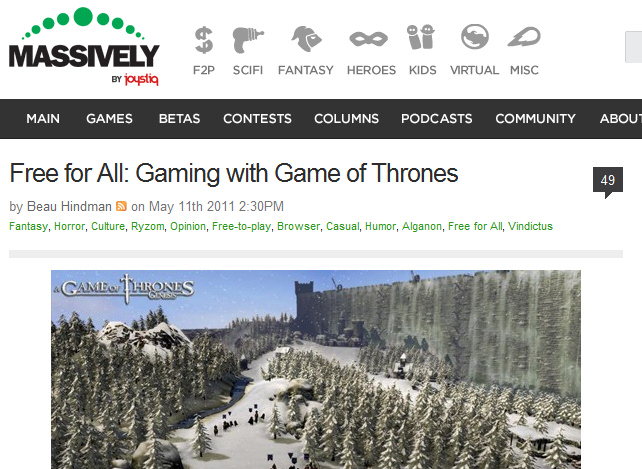 Beau Hindman from massively.com has reviewed Illyriad today on a live 1hr videocast this afternoon.

Develop Online ran an interview with the Illyriad Dev Team and our third party partners on how it all works together using a highly distributed environment.

You can read the Interview here. 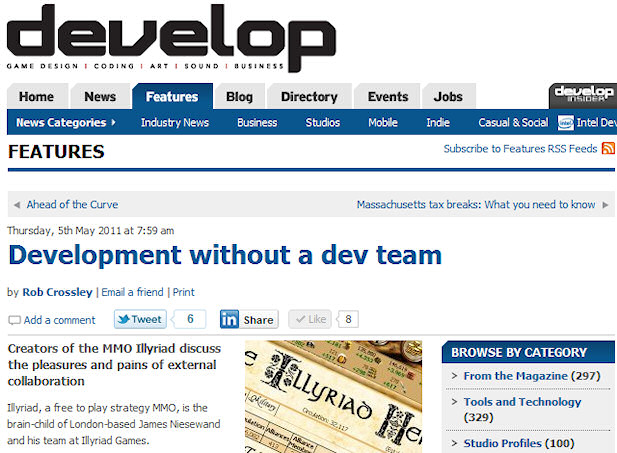