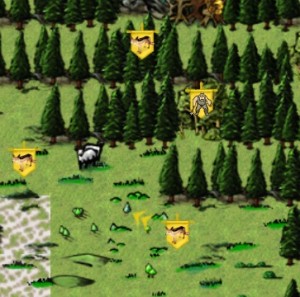 Old style game development (like boxed console games) can be a struggle to keep control. Any unexpected behaviour is a bug. Any part of the game that the developer doesn’t architect, is a source for alarm.

But with Illyriad, our goal is to surrender control. If we understand all the behaviours in the world, that means the world is too simple and predictable. Any part of the world that we don’t control is a potential source of wonder.

In old style game development, the developer wants to plan what will happen. In Illyriad, we want the players to have a part in what happens. The recent changes to animal behaviour are an excellent example of where the game is going.

Illyriad’s players are well aware that in the past, we have trialed a system by which items can be picked up from hunting animals. It wouldn’t surprise anyone to learn that, in the future, animals might be a source of items. Now, a conventional approach would be to say: “We must control the number of items that players can get from these animals! We must calculate the exact numbers of animals in the world, exactly where they will be – nothing will be gathered without us, the developers, decreeing that it shall be so.”

Depending on how far or fast we take it, the locations of animals and the frequency of any item drops from them, will be mostly out of our control as developers.

Animal item drops, if they were to be reintroduced, would be gathered not because we have made it so, but because the players have made it so. It is, after all, their game and they should be able to influence it. This means that, as developers, we have to surrender control.